Inside the Combat Zone: The Stripped Down Story of Boston's Most Notorious Neighborhood

Book Resurrects Boston’s Combat Zone
Inside the Combat Zone: The Stripped Down Story of Boston’s Most Notorious Neighborhood

Upscale restaurants, majestic theaters, and luxury condos line the streets of downtown Boston today. Students, office workers, doctors, and shoppers navigate the busy sidewalks along Washington and Boylston Streets, giving little thought to the historical significance of their surroundings. The bustle distracts passersby from what may be the city’s dirtiest little secret: these blocks were once home to Boston’s most notorious neighborhood. The Combat Zone, a five-plus-acre, city- sanctioned adult entertainment district, was as sordid and alluring as anything found in Amsterdam or Vegas. Indeed, Boston’s now tony neighborhood once resembled the set of HBO’s The Deuce, all with the blessing of city officials.
In her provocative new book, Inside the Combat Zone: The Stripped Down
Story of Boston’s Most Notorious Neighborhood (Union Park Press, 2017) veteran reporter Stephanie Schorow recounts the stories that made the Zone infamous. Meet the
dancers who stripped to punk rock, the cops who tried to keep order on the streets, and the hookers who turned tricks and slipped wallets from gullible tourists. Go beyond the enticing marquees promoting all-nude revues to discover how the Zone—in an era dogged by miserable economics— remained one of Boston’s most profitable neighborhoods.
With Inside the Combat Zone, Schorow examines the constitutional and societal issues that led Boston to engineer an audacious social experiment, heralded across the nation as the solution to the pornography epidemic. She introduces the players who made it all possible and the antics and tragedies that unfolded as a result of their decisions. The streets come alive through interviews with former city planners, strippers, and porn merchants. Some nostalgically recall the Combat Zone as a seductive adult playground where men and women alike found the freedom to express themselves; others remember it as a dangerous, crime-ridden neighborhood. Schorow deftly captures a moment in Boston’s history that helped shape the city today—and that will likely never be seen again.
Schorow is the author of six books on Boston history, including Drinking Boston: A History of the City and Its Spirits, The Cocoanut Grove Fire, and The Crime of the Century: How the Brink’s Robbers Stole Millions and the Hearts of Boston. She has worked as an editor and reporter for the Boston Herald, the Associated Press, and numerous other publications.
###

Drinking Boston
From the revolutionary camaraderie of the Colonial taverns to the saloons of the turn of the century; from Prohibition—a period rife with class politics, social reform, and opportunism—to a trail of nightclub neon so bright, it was called the "Conga Belt," Drinking Boston is a tribute to the fascinating role alcohol has played throughout the city's history. Teasing out this curious relationship—in particular, the clash between a constrained Puritanism (lingering like a hangover today) and a raucous revolutionary spirit—Drinking Boston introduces the cast of characters who championed or vilified drinking and the places where they imbibed—legally and otherwise. Visiting some of Boston's most storied neighborhood bars, this pub crawl ends with Boston's distinct recipe for the current cocktail renaissance sweeping the nation. Stephanie Schorow serves up a remarkable cocktail representative of Boston's intoxicating story: its spirit of invention, its hardscrabble politics, its mythology, and the city's never-ending battle between personal freedom and civic reform.

From: BostonZest (http://www.bostonzest.com/2012/12/we-recommend-drinking-boston-the-book.html)
The book takes you on a time travel trek from inside Boston’s first colonial taverns, through the saloon era, on to Prohibition, stopping at the 1930s and 1940s nightclub scene, and bringing you right up to the current craft cocktail movement. Did you know that early taverns sometimes served as courtrooms? Along the way Schorow delves into the issues of class, social reform, and reminds you of the breweries, neighborhood bars, and some of the people who were an important part of what she calls a “...drinking town.”

The Crime of the Century: How the Brink's Robbers Stole Millions and the Hearts of Boston 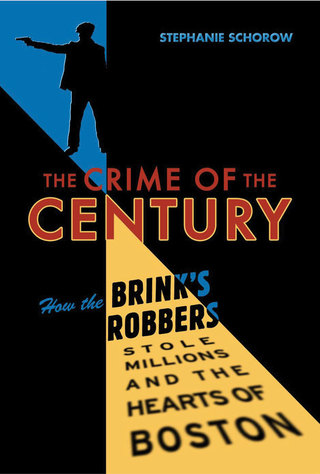 It was once called the Crime of the Century
The first history in thirty years of Boston’s most celebrated heist details the story of what was dubbed “the crime of the century.” On January 17, 1950, seven robbers in Halloween masks walked into a counting room of the Brink’s armored car garage on Prince Street in Boston and walked out with $2.5 million in cash, checks, and securities. It was the largest robbery in U.S. history to date. Yet not a shot was fired, not a drop of blood shed. The robbers simply said, “This is a stick-up,” before gagging and tying up the guards. Within minutes they escaped into the night with bags stuffed with money, leaving almost no clues behind.

You think you know the story of the Brink’s robbery (I know I did), but the truth is really stranger—and far more compelling—than Hollywood led us to believe. Stephanie Schorow does a wonderful job separating fact from fiction in this entertaining and riveting book.

Boston on Fire: A History of Fires and Firefighting in Boston

Fires have shaped Boston since its founding on a narrow peninsula in 1630. In the first comprehensive history of Boston's major fires, Stephanie Schorow tells the dramatic tales of seventeenth-century fires (which were viewed as signs of God's wrath), the 1834 Ursuline convent fire, the Great Fire of 1872, the Chelsea conflagrations of 1908 and 1973, the tragic Cocoanut Grove nightclub fire, the Vendome Hotel collapse that killed nine firefighters in 1972, and an arson ring that terrorized the city in the 1980s. Chapters are also devoted to two key Boston innovations: the Hunneman fire engine and the citywide fire alarm system (first in the nation) developed by William Francis Channing and Moses Farmer.

The details of fire-fighting operations, as well as many personal reflections of those involved, make for a book that anyone with a love of the fire service should cherish. It should also be most instructive to the general population, who know so little about what firefighters actually accomplish on their behalf. 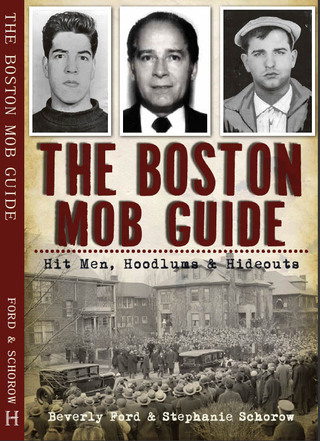 A guide to the Bad Boys of Boston
The capture of notorious mobster James “Whitey” Bulger closed an infamous chapter in Boston history. Yet, the city’s criminal underworld has a long and bloody rap sheet that stretches back to the beginning of the 20th century. Boston journalists Beverly Ford and Stephanie Schorow reveal the underbelly of Boston through profiles of ruthless gangsters like Charles “King” Solomon, the Angiulo brothers, Joseph “The Animal” Barboza, Stephen “The Rifleman” Flemmi and many more. Ford and Schorow navigate the backrooms and seedy hangouts where deadly hits and lucrative heists were hatched to guide readers to the real story of Boston’s gangster past.

From the introduction:
In doing their research, both authors were repeatedly struck by the complicated but strong connections among the various mobsters. Bev Ford, an investigative reporter, had to untangle numerous threads in Whitey’s world, a tough challenge even though she had covered the gangster for years as a cop beat reporter for the Boston Herald. Stephanie found that the names she had encountered while researching the 1942 Cocoanut Grove nightclub and the 1950 Brink’s robbery for her previous books popped up again in the 1950s, 1960s and 1970s. Boston, at its core, is a small town, and the strong connections that once linked Brahmin bluebloods and the literary elite are eerily mirrored by the ties among the hit men, loansharks, guns- for-hire and dope dealers who also walked Boston’s streets.

East of Boston: Notes from the Harbor Islands

Now in a second, updated edition.

For the traveler who might not have a yacht—just a sense of humor and a spirit of adventure—Stephanie Schorow proves you can still embark on a voyage through the Boston Harbor Islands. Her droll travelogue complete with camping tips and driving directions, takes the measure of these gloriously wild Edens all within sight of the city’s skyline. This is an essential guide for enjoying the islands today and getting a sense of their amazing past. With photos, helpful hints and lots of insider information, East of Boston is the book for your boat trip, camping adventure or for armchair traveling in the dead of winter.

"Stephanie Schorow writes with passion and humor about the 30-odd islands that dot Boston Harbor. It's all here -- from military history to ghostly legends, from flora and fauna to the history of the old city dump on Spectacle Island. Best of all, the book is stuffed with useful and practical information about how to access and enjoy the islands. Stephanie personalizes it all with her breezy writing style that Edward Rowe Snow, the late great chronicler of Boston Harbor, would have loved."
Jeremy D'Entremont, historian for the American Lighthouse Foundation and author of The Lighthouses of Massachusetts.

"I love Stephanie's way of combining historical and island-hopping facts with a sprinkle of humor. Exploring the islands is a lifetime experience. You will want to have this book in your backpack when you're away from home."
Suzanne Gall Marsh, Founder, Friends of the Boston Harbor Islands Inc.

In this addition to the "New England Remembers" series, Stephanie Schorow continues her groundbreaking research into one of Boston's devastating fires, uncovering more evidence about a tragedy that is as controversial today as it was unthinkable in 1942.

Outside, it's bitter cold. Inside the nightclub, the joint is jumping. Delighted at the pleasure of being out on the town on a Saturday night in Boston, crowds of people – young and old – hurry along Piedmont Street in the city's theater district, heading for the revolving door under the Cocoanut Grove sign that reaches toward the sky. They anticipate the loud buzz of conversations, the cocktail-fueled laughter, the air saturated with cigarette smoke and perfume. They will check their coats and stroll into the main dining room, a faux South Seas paradise, with fake palms trees, rattan furniture, leatherette walls and distinct zebra-pattern chairs. Maybe they'll be lucky. They might get seats in the area reserved for celebrities – a raised terrace set back from the main stage. Who knows who could be there? Cowboy star Buck Jones was in town, wasn't he? There was a new singer, too. Dotty Myles was only a teenager, but said to already be a star. Sure, it was expensive – a half a dozen oysters was 40 cents; broiled scrod was 80 cents, a baked lobster was $2.25, a tenderloin steak was $2. But it was the Cocoanut Grove, after all.
A night on the town. That was the plan for many Bostonians on November 28, 1942. That is, until they walked through the revolving doors and found the club too crowded for comfort and the heat too high for enjoyment. The hat check room was so filled, coats were stacked on the floor. The dance floor was shrinking as waiters tried to squeeze even more tables into the main dining area. Disappointed, would-be clubgoers left – to seek another club, restaurant or maybe call it a night. They would not realize until the next day how lucky they had been.

Boston's Fire Trail: A Walk through the City's Fire and Firefighting History